El Cid, Fernán González, and The Seven Princes of Lara.

Other stories include the 13th-century BC Coming of the Almujuces to Galicia, How the Basques Discovered Ireland, the naming of Madrid’s Street of the Head, the tragic Peña de los Enamorados in Antequera, and the dramatic true history behind Guzmán el Bueno’s Heroic Deed of Tarifa. 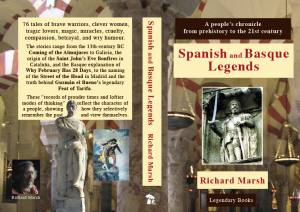 Fernán González is on the front cover; Guzmán el Bueno and the lovers about to leap from the Peña de los Enamorados on the back. The cover background is the interior of the Mezquita in Córdoba.

Even with a 16-page colour photo insert, there was still not enough space for all the pictures I wanted to include in the book. 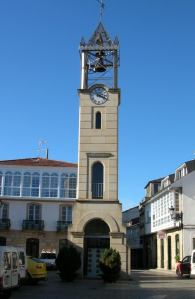 When I was writing Spanish and Basque Legends, I felt it was important to translate the stories with not only the content but also the style of the original authors intact. In my Introduction, I say:

“My inner eye frequently glanced at the inscription on the reconstructed clock tower in the Galician village of A Pobra de Trives. When the 17th-century church of San Bartholomé was demolished in 1928, the bell/clock tower was left standing, but was then torn down in 1968. In response to popular demand, it was rebuilt in 1996.”

On either side of the doorway are two brass plaques (click to enlarge):

Another picture I didn’t have space for in Spanish and Basque Legends, this is a painting by the 18th-century artist Andrés de Islas of the Imposition of the Chasuble on San Ildefonso in the Cathedral of Toledo. The legend tells how the Virgin Mary presented Ildefonso with a chasuble made by angels, as a reward for his defence of her perpetual virginity. When the Moors captured Toledo and turned the cathedral into a mosque, they preserved the spot where she had stood, because they had respect for her as the mother of Jesus.

Imposition of the Chasuble on San Ildefonso, Andrés de Islas

And here is a treatment of the legend by the master, Diego Velázquez. Ildefonso is more realistically depicted as an older man: he was an archbishop at the time. 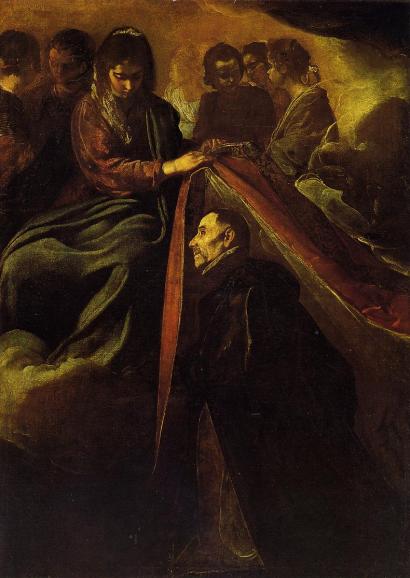 Imposition of the Chasuble on San Ildefonso