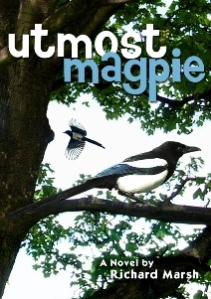 In Britain and Ireland, many people believe – though some pretend they don’t – that the sighting of one magpie presages bad luck, and two mean good luck. Here is the full range of magpie prophecies.

One for sorrow, two for joy,
Three for a girl, four for a boy,
(Or: Three for a wedding, four for to die)
Five for silver, six for gold,
Seven for a secret never to be told,
Eight for a wish, nine for a kiss,
Ten for a bird you must not miss.

The unnamed Captain of a flock of magpies has ended the tradition of Mortal Combat for leadership out of a respect for life, especially his own. He is a ruthless, self-serving dictator — neither left nor right wing, but a bit of both — an anti-hero whose actions impel others to realise their potential and become heroes.

When the innovative Kawa mounts a successful — but bloodless — Challenge, Flock take a major step up the evolution ladder. On Kawa’s heroic death, the compassionate Ghareel, the first female captain, elevates Flock from mere folklore into legend. Ghareel is killed defending a little girl from a vicious dog, and Flock is ruled by a series of incompetent leaders.

Can the elderly, crippled, deaf, nearly blind ex-Captain, now with a newly minted name, restore Flock to their (and his) former glory?

Utmost Magpie is a story about magpies who, led by their captain, deliver messages to people. The messages foretell – by the number of magpies seen – what may happen to the people… The events foretold by the magpies are prophetic, but not entirely unavoidable. I suspect the story is heavily laden with symbolism that I haven’t stopped to analyze in its entirety. The satire goes right over my head too… or at least, mostly it does.

Despite that, I can still see the magpies as politicians and their messages as the rhetoric delivered by politicians in an attempt to convince their colleagues to vote for certain measures when the political body is in session.

On another level, Utmost Magpie is an entirely enjoyable fantasy tale about magpies and the “work” they do. Utmost Magpie can be read as “light and fluffy” or studied in depth. I can recommend this book, even to those who don’t normally read satire.

This review has been simultaneously published on Amazon.com, Dragonviews, and LibraryThing. Utmost Magpie was given to me free in exchange for this review.

Available from Amazon US and Amazon UK

If you don’t have a Kindle Reader, you can download the book to your computer. Go to one of the Kindle sites and click on “Available on your PC/Mac” on the right of the screen.